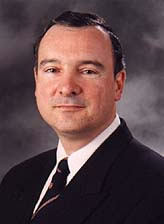 Professor Serge Gauthier (Medicine Doctor, Fellow of the Royal College of Physicians - Canada) is Senior Scientist of the Medical Research Council/Pharmaceutical Manufacturers Association of Canada Health Program. Professor of the Departments of Neurology & Neurosurgery and Psychiatry at the McGill University, he was Director of the McGill Centre for Studies in Aging, from 1986 to 1997.

He has kindly accepted an interview on a very interesting topic nowadays: Cholinesterase inhibitors (ChEI) switching, as an strategy for a continued successful treatment of Alzheimer's disease (AD).

Circunvalación del Hipocampo: What are the ChEI most positive therapeutic effects on AD patients?

Professor Gauthier: An expert review on this topic took place at the World Alzheimer Congress in Washington DC (District of Columbia) in July 2000 and published their conclusions (Winblad B, Brodaty H, Gauthier S et al. International Journal of Geriatric Psychiatry 2001; 16: 653-666).

Although the initial expectations in the clinical testing of ChEI were dramatic and sustained cognitive enhancement, the reality in research and practice has been mild improvement in attention and initiative peaking after three months, and a slow return to the starting point over one year. Families do pick up this effect in the social interactions and some of the activities of daily living (ADL).

Furthermore there is evidence for behavioral benefits in delaying emergence of troublesome neuropsychiatric symptoms, and improvement of some such as apathy, anxiety, hallucinations. Finally, there is some evidence that the sustained use of ChEI at therapeutic doses will delay the need for nursing home placement.

Professor Gauthier: The natural history of AD is such that the decline in cognition and functional autonomy is slower in mild stage (Mini-Mental State Examination, MMSE 18 to 26) and faster at moderate stage (MMSE 10 to 17).

This is reflected in the effect size observed between patients on ChEI versus placebo in mild versus moderate stages: the biggest difference is at the moderate stage, as shown in a study comparing donepezil to placebo in patients with MMSE ranging from 10 to 17 (Gauthier S, Feldman H, Hecker J et al. Current Medical Research and Opinion 2002; 18: 347-354): the treatment difference for the MMSE was 2.06 after six months, 4.44 for the Severe Impairment Battery, 9.25 for the ADL scale Disability Assessment for Dementia, 5.92 for the Neuropsychiatric Inventory 12-item total score. It is as yet unknown if there is benefit in the severe stage of AD (MMSE <10), but randomized studies are under way to clarify this important issue.

Professor Gauthier: There is a huge variability in the duration of treatment, to a great extent based on the expectations of the patient, his/her family, and the treating physician. Marketing surveys in some countries show that many patients stop after three months, likely because of lack of improvement.

Expert reviews (Gauthier S, Emre M, Farlow MR et al., Current Medical Research and Opinion 2003; 8: 707-714) recommend at least six months at therapeutic doses of the first ChEI prescribed, and most patients will be stable on that first drug for at least one year. The issue is what to do when the initial response has been lost, and the patient has "crossed his/her baseline" or starting point.

La "Circunvalación": Is there a pharmacological basis for ChEI switching?

Professor Gauthier: Yes. There are clear differences among second generation ChEI donepezil, rivastigmine and galantamine, in terms of which cholinesterases are inhibited (acetyl- versus butyryl-), the demonstrated duration and level of inhibition of these enzymes, the additional modulation of the nicotinic receptors.

Circunvalación del Hipocampo: From a clinical point of view, what benefits can be obtained from ChEI switching?

Professor Gauthier: There is data available from open-labeled studies, principally done by switching from donepezil to rivastigmine. In the largest study fifty percent of patients showed improvement in MMSE and the clinical global impression of change over 26 weeks after the switch (Auriacombe S, Pere JJ, Loria-Kanza Y, Vellas B. Current Medical Research and Opinion 2002; 18: 129-138).

Circunvalación del Hipocampo: What patients are eligible for ChEI switching, and which are not?

Professor Gauthier: Patients should not be switched if they tolerate well a ChEI at therapeutic doses (donepezil 5 or 10 mg/day; rivastigmine 6, 9 or 12 mg/day; galantamine 16 or 24 mg/day) and are clinically responding to current treatment.

Switching should be considered if (1) there is clear evidence for initial of lack of efficacy, e.g. observable decline during the first six months of treatment despite reaching therapeutic doses, (2) loss of efficacy after the initial response to treatment (most common situation), (3) safety/tolerability issues not resolved by slower titration or ingestion at meal time.

Circunvalación del Hipocampo: How can ChEI switching be performed in a safe way for the patient?

Professor Gauthier: There is no unanimity on how best to perform the switch. Our expert recommendations (Gauthier S, Emre M, Farlow MR et al., Current Medical Research and Opinion 2003; 8: 707-714) reflect the most common practice, e.g. to switch overnight from one drug to the other if there are no safety or tolerability problems from the first drug, and a washout of 7 to 14 days if there are tolerability problems.

In a recent review Dr Jeffrey L. Cummings (American Journal of Geriatric Psychiatry 2003; 11: 131-145) recommended to wait five half-lives between drugs in all cases (off donepezil 15 days, off rivastigmine or galantamine 2 days). The other extreme is overlapping two ChEI with lower doses of the first drug while starting the second one.

Another unresolved issue is the dose at which the second drug should be started: if too low, there is a risk of a "discontinuation" effect, with cognitive or functional decline and emergence of behavioral symptoms; it is thus prudent to keep the lower non therapeutic doses of the second ChEI (rivastigmine 3mg/day, galantamine 8mg/day) for the shortest duration possible, e.g. 2 to 4 weeks, titrating up to minimally effective doses thereafter.

Prospective randomized studies would be required to answer the issue more fully, but there is agreement that patients who did not tolerate the first ChEI should be given a chance to try a second and even a third one, before quitting on the drug class as a whole.

Circunvalación del Hipocampo: What are the most common ChEI involved in these drug switching?

Professor Gauthier: Since donepezil has been used the longest and the widest, the data available is about switching from that drug to either rivastigmine or galantamine. There is no reason to believe that switching could not be done the other way.

Circunvalación del Hipocampo: What is the experience on switching more than once, or back-switching to the original ChEI?

Professor Gauthier: There is no published data on multiple switching, but it has been done clinically. Very often patients and/or their families will want to go back to the original ChEI because of loss of benefit during the transition from one drug to the other, or not achieving the level of improvement seen at first exposure to a ChEI.

Expectations should thus be realistic: it is unlikely that there will be an "awakening" effect at two to three months on the second ChEI. There is also a risk of clinically significant discontinuation or washout effect, of which the patient and family should be made aware of.

Circunvalación del Hipocampo: Professor Gauthier, thank you very much for your kindness in accepting this interview. We are sure it will help to clarify all terms on this topic.