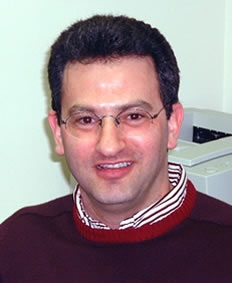 Kenneth Langa (Medicine Doctor, Philosophy Doctor) is Assistant Professor in the Department of Internal Medicine at the University of Michigan (UM), an Investigator at the Veterans Affairs Center for Practice Management and Outcomes Research, and a Faculty Associate in the Institute for Social Research. He is currently the Co-Director of the UM SGIM (Society for General Internal Medicine)-Hartford Collaborative Center for Research and Education in the Care of Older Adults and the UM Patient Safety Enhancement Program.

Doctor Langa is the current recipient of a Career Development Award from the National Institute on Aging, and a New Investigator Research Grant from the Alzheimer's Association.

His current research focuses on estimating the societal costs of chronic disease among older adults, with a focus on Alzheimer's Disease, dementia and mild cognitive impairment.

JAMA (Journal of the American Medical Association) has recently published an excellent review on Mixed Dementia (Kenneth M Langa et al. -et alii. Mixed Dementia: Emerging Concepts and Therapeutic Implications. JAMA. 2004;292:2901-2908). We contacted Doctor Langa as the first author for that review, asking him for an interview on the topic, and he has very kindly accepted.

Circunvalación del Hipocampo: Doctor Langa, what clinical and pathological criteria define mixed dementia, and what is the prevalence and incidence of this particular type among dementias as a whole?

Doctor Langa: One of the current challenges of clinical and epidemiological research on mixed causes for dementia is a lack of consensus regarding appropriate clinical criteria and terminology. In our recent review paper on this topic, we defined mixed dementia as cognitive decline sufficient to impair independent functioning in daily life resulting from the co-occurrence of Alzheimer's disease (AD) brain pathology and cerebrovascular brain pathology, documented either by clinical criteria or neuroimaging findings.

The National Institute of Neurological Disorders and Stroke - Association Internationale pour la Recherche et l'Enseignement en Neurosciences (NINDS-AIREN) diagnostic criteria for vascular dementia (VaD) do not include a category for "mixed dementia," recommending instead the term "AD with cerebrovascular disease." Alternatively, the Hachinski Ischemic Score, the International Classification of Diseases, Tenth Revision (ICD-10), and the Diagnostic and Statistical Manual of Mental Disorders, Fourth Edition (DSM IV), all include a mixed dementia category, although specific criteria differ.

A number of recent studies that did autopsies on individuals from the community who had dementia found that nearly 50% of those with dementia had brain changes of both AD and VaD. Prior studies that focused on individuals who were treated at academic medical centers have found lower rates of mixed dementia and higher rates of "pure AD" and "pure VaD," but this is likely because the types of patients that end up at academic centers are not entirely representative of the "real world."

Circunvalación del Hipocampo: Provided that no specific treatment is yet available for mixed dementia, does some evidence exist for using drugs originally targeted to Alzheimer's disease?

La "Circunvalación": Cholinesterase inhibitors' (ChEI's) role can be explained for AD through this disease's cholinergic transmission deficiency. What should be the pathophysiological basis for ChEI's additional effect, if any, when diffuse vascular changes overlap AD pathology?

Circunvalación del Hipocampo: Given the underlying vascular component in mixed dementia, could we expect efficacy from cardiovascular risk prevention measures?

Doctor Langa: Yes, I have become more and more convinced that cardiovascular risk factor (CRF) control is important for prevention of dementia. Right now, the evidence is strongest for hypertension control as an important factor in the prevention of dementia as shown in the Systolic Hypertension in Europe (Syst-Eur) trial5,6, but there is also suggestive evidence that increased physical activity, maintenance of a healthy weight, and control of hypercholesterolemia all may help prevent the incidence of VaD, AD, and mixed dementia.

Circunvalación del Hipocampo: What treatment goals can be considered as appropriate for mixed dementia?

Doctor Langa: I think that the discussion of appropriate treatment goals for mixed dementia, as well as other types of dementia, with patients and their families is an extremely important, but difficult part of the clinical care of dementia patients. Desired treatment goals may vary widely among families (and even within families) depending on the preferences for "aggressiveness" for intervention. Some have described dementia as a "slow-motion" disaster, and it can often be hard to "do nothing" when watching a loved-one decline slowly. However, clinicians should make sure that patients and their families understand the generally modest clinical benefits that are to be expected with current treatments for AD, VaD, and mixed dementia. Given the significant variability in response to ChEIs, clinicians, patients, and caregivers should monitor for treatment-related improvement or stabilization of decline over 8 to 12 weeks of initial treatment in cognitive, ADL (Activities of Daily Living), and behavioral domains, and discuss the appropriate definition of a meaningful benefit (e.g., increased independence, alertness, or ability to communicate with family members) from ChEI treatment.7

Circunvalación del Hipocampo: How could we explain a beneficial effect from statins, aspirin, antihypertensive drugs etc. for patients without pathological or clinical features of vascular dementia?

Doctor Langa: I think this is a very important and interesting area of research right now. As noted above, there is growing evidence that cardiovascular risk factors may also increase the risk for dementia through there effects on the cerebrovasulature and cerebral perfusion. However, there is also some evidence that these risks may have a direct influence on the "amyloid cascade" that is thought to be the cause for AD. For instance, high levels of cholesterol in neuronal membranes are associated with increased amyloid-beta production8. Also, as noted above, some researchers believe that hypoperfusion of the brain may also be contribute to the production of amyloid-beta and the development of AD. Therefore, treatment of cardiovascular risks with statins, aspirin, and antihypertensive drugs may not only prevent vascular dementia, but may also prevent the pathological process leading to AD. I would recommend an excellent recent review of these issues by Casserly and Topol8.

Circunvalación del Hipocampo: ChEI withdrawal is frequently made when the progression of the disease leads to a lack of its efficacy. Do you think that a caregiver's subjective impression can be affected by the knowledge of this usual clinical practice?

Doctor Langa: I think it might be. I actually think that the whole dynamic of patient and caregiver interactions around the use of medications in dementia is an extremely complex and interesting issue. As I mentioned above, my impression from clinical interactions with families is that, at least in the United States, caregivers would prefer to "try something" rather than no treatment, as long as the side-effects of the medication are not too great. If a caregiver generally thinks that medications are providing some benefit to the patient, the caregiver's subjective impression may be affected by the concern that a physician will recommend discontinuing the medication if there is not evidence of a continuing treatment benefit. The caregiver may consciously or sub-consciously over-estimate the treatment benefit in order to increase the likelihood that the physician will recommend continued treatment. On the other hand, I have seen some caregivers who quickly attribute seemingly unrelated side-effects to a newly-started dementia medication. This may be because they were pessimistic about the efficacy of the medication in the first place, and were "looking for" a good reason to discontinue the medication.

Again, I think the joint decision-making among patients, caregivers, and physicians regarding starting and stopping medications is an important area for future research to help guide dementia therapy. Additional research is needed to define better what individuals and families hope to achieve from dementia treatment and to determine the most appropriate use of medication to achieve these goals.

Circunvalación del Hipocampo: Dr Langa, thank you very much for sharing with us your knowledge and experience on mixed dementia, so helping for a better understanding of this frequent type of dementia.