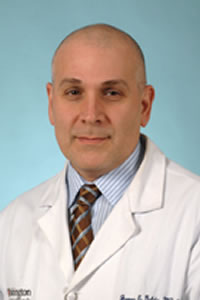 James E. Galvin (Medicine Doctor, Master of Public Health) is Associate Professor of Neurology, Psychiatry and Neurobiology, and Director of the Memory Diagnostic Center at the Washington University School of Medicine in Saint Louis, Missouri. He has just published in Neurology, the official journal of the American Academy of Neurology, an excellent article on the effect of cognitive fluctuation on neuropsychological performance in aging and dementia.

Circunvalación del Hipocampo: Regarding to your article on cognitive fluctuations and their effects on neuropsychological performance for both healthy aged and demented subjects, which could be the causes/meaning of such fluctuations for the first group? Could they act as a clinical marker or risk factor for dementia?

Professor Galvin: Cognitive fluctuations were detected in 0.7% of nondemented older adults.  The finding that such small percentages of nondemented individuals fluctuate while up to 15% of Alzheimer patients (and a large proportion of dementia with Lewy body patients) fluctuate suggests that the presence of fluctuations is associated with dementia rather than being a function of normal aging.  However, we do not yet know if the small number of nondemented older adults who experience fluctuations will go on to develop cognitive impairment; we hope to address this with longitudinal follow-up. Given the strong influence fluctuations have on cognitive performance, it is possible that fluctuations could serve as an infrequent but important clinical marker for dementia.

Circunvalación del Hipocampo: Which strategies would you propose to minimize the impact of cognitive fluctuations on the results of neuropsychological tests on patients with dementia?

Professor Galvin: The first question we need to address is underlying biological causes of fluctuations. In the article, we speculate that fluctuations may be associated with alterations in ascending cholinergic pathways, attentional deficits, electroencephalographic spectral patterns and decreased cerebral perfusion. However, none of these hypotheses have been sufficiently tested in the context of Alzheimer disease to answer the question.  We are proceeding with a number of imaging strategies to identify potential sources for fluctuations and this may better help us identify treatment strategies.  That said, anecdotally, there has been some positive experience with improvement in alertness and arousal in dementia with Lewy bodies and Alzheimer disease patients who fluctuate with cholinesterase inhibitors.  This seems like a reasonable strategy until we better understand the biologic bases of fluctuations.

Circunvalación del Hipocampo: Could you explain the applicable criteria to assess cognitive fluctuations?

Professor Galvin: There are a number of validated scales to assess cognitive fluctuations, each tap into different constructs.  Fluctuations appear to be spontaneous alterations in arousal, alertness and attention that can vary from minute to minute, day to day.  In this study, we used the Mayo Fluctuations Questionnaire. This 4-item scale, developed by Dr Tanis Ferman at the Mayo Clinic in Jacksonville, assesses four items: Being drowsy or lethargic despite getting enough sleep the night before; sleeping for 2 or more hours before 7 pm; the patients flow of ideas being disorganized, unclear or not logical; and the patient staring into space for periods of time. These YES/NO questions are asked of an informant. If the informant endorses 3 or more questions, then cognitive fluctuations are present. The new information we discussed in this article is effect of fluctuations on Alzheimer disease without any influence from the other core features of Dementia with Lewy bodies such as Parkinsonism, hallucinations or REM (rapid eye movement sleep stage) sleep disorder.

Circunvalación del Hipocampo: Are there identified factors that could predict the risk for cognitive fluctuations on mild Alzheimer disease patients?

Professor Galvin: We were not able to identify any predictive risk factor other than patients who fluctuated were slightly (but not significantly) younger.

Circunvalación del Hipocampo: Can be identified distinctive features for cognitive fluctuations between Alzheimer disease and dementia with Lewy bodies?

Circunvalación del Hipocampo: A final question, perhaps abusing your generosity: We know about your contributions to the knowledge of protein aggregates on several dementia-exhibiting neurodegenerative disorders. What’s your current opinion about their role on the pathological process: cause or consequence?

Circunvalación del Hipocampo: Professor Galvin, thank you very much for accepting this interview. We are sure that all of our readers will find it clear, helpful and very interesting.