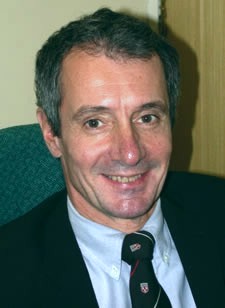 Ian McKeith (Medicine Doctor, Bachelor of Surgery, Fellow of the Royal College of Psychiatrists, Fellow of the Academy of Medical Sciences) is Professor of Old Age Psychiatry at the Institute for Ageing and Health (IAH), Wolfson Research Centre, Newcastle General Hospital, Newcastle upon Tyne, UK. Previously Course Director for the Newcastle Undergraduate Psychiatry module (1989-2000), he currently teaches old age psychiatry to medical students on clinical placement and to postraduate trainees in psychiatry, and supervises research students and staff.

He has kindly accepted an interview on Dementia with Lewy Bodies (DLB), a frequent -and often underdiagnosed- type of dementia he is very familiar with. Since the early 90's, he has pioneered the research to gain an understanding of DLB, and to identify it as a separate and distinct disease. He organizes international DLB conferences, and leads the Newcastle Brain Ageing and Dementia Research Group, a division of the IAH. He's also leader of the Consortium on Dementia with Lewy Bodies International Workshop, the source for the validated and universally accepted clinical criteria for this disease.

Circunvalación del Hipocampo: What basic differences can be observed between DLB and Alzheimer's Disease (AD)?

Professor McKeith: It all depends how you define DLB and AD. Let us suppose they are principally determined as two separate pathological disorders. Reviewing the clinical charts the AD cases will typically have had prominent memory impairment, unimpaired consciousness and little neurological dysfunction. DLB cases will have recurrent visual hallucinations (VH), fluctuating cognition and consciousness and spontaneous parkinsonism ie not drug induced [1]. At this level the two syndromes are relatively easy to distinguish. The problems come with cases that have mixtures of Alzheimer and LB (Lewy bodies) pathology.

DLB is still under-diagnosed clinically. It accounts for about 10% of all dementia cases coming to autopsy, but surveys of clinical samples report only about 5% to have the DLB syndrome. [2]

Circunvalación del Hipocampo: Extrapyramidal signs are frequent in DLB. What differential characteristics can be helpful in order to distinguish them from those in Parkinson's Disease (PD)?

Professor McKeith: Originally we believed that parkinsonism in DLB was mild and often appeared only late in the course of the illness. More recent research has shown this not to be the case.

About 75% of DLB cases have parkinsonism and it is very similar to that seen in similarly aged PD patients. Extrapyramidal features may be more symmetrical in DLB and the postural instability/gait difficulty phenotype is more common than tremor dominant PD which is typically seen in younger patients. [3] The rate of progression of motor symptoms in DLB and PD is similar at approximately 10% per year. The subtle differences between the «parkinsonism» of DLB and PD may be accounted for by intrinsic degeneration of the striatum in DLB [4] which is absent in the early stages of idiopathic PD, although which may occur later in disease when PD patients begin to develop dementia.

Circunvalación del Hipocampo: There is a known overlap of neuropathology between AD, DLB and Parkinson's Disease. Does an association exist between a determined clinical pattern and the predominance of a particular kind of neuropathologic lesion over the rest?

Professor McKeith: Only about 10-20% of DLB cases are «pure» i.e. without any significant accompanying pathology -these patients are likely to be younger and more parkinsonian. But pure DLB cases may have a «full-house» of DLB symptoms suggesting that LB pathology alone is a sufficient cause for symptom formation.

A further 10-20% of cases have sufficient neocortical plaque and tangle pathology (Braak stages V & VI) to qualify for a concomitant neuropathological diagnosis of AD. These patients are much more likely to look like AD clinically with low rates of the the three core features (VH, fluctuation, parkinsonism) by which clinicians try to identify DLB. This is probably the major reason for the under-diagnosis of DLB referred to above.

The majority of DLB cases have some Alzheimer type pathology, usually hippocampal and neo-cortical amyloid plaques. Most of these cases will have the typical DLB clinical features. On top of all of this one has to consider the contribution of vascular pathology which we find in up to 30% of our DLB cases. This again can modify the clinical picture, either in terms of onset and progression or presence of focal signs and symptoms. So it is simplistic to think of one pathology and one clinical profile. The diagnosing doctor has to be aware of the possibility of mixed pathology and a mixed clinical picture.

La "Circunvalación": In your opinion, what is the optimal drug management for psychotic symptoms in DLB?

Professor McKeith: It is hard to generalise but if forced I would say that first one has to exclude systemic disease or pharmacological toxicity as a cause of the psychosis.

Anti-parkinsonian medications may contribute to confusion and hallucinations and should be reduced to the lowest effective dose of levodopa monotherapy. If psychotic symptoms persist a cholinesterase inhibitor can be tried, often with very beneficial effects particularly on apathy, anxiety, sleep disorder and hallucinations.[5, 6] Neuroleptics and atypical antipsychotics should be avoided since they may induce severe sensitivity reactions with worsening of cognitive and motor function. These reactions have been associated with a 2-3 fold increase in mortality. [7] Prescribing for DLB patients requires a specialist experienced in the disorder. [8]

Circunvalación del Hipocampo: Some bibliographic reviews have reported the existence of families with more than one case of DLB. Is there a familial occurrence or a familial form of DLB?

Professor McKeith: This is a rapidly changing field. Most DLB is sporadic as is PD. But there are a few families in which PD and DLB are genetically determined by abnormalities in the gene for alpha-synuclein, the protein which is believed to be most implicated in LB formation. [2] The gene may have a mutation or have repeat sequences (duplication or triplication). In such families the presentation can be with either PD or DLB providing strong evidence that these two disorders share a common basis. The families with a gene duplication have PD only suggesting that there is a «dose effect» i.e. more alpha-synuclein overproduction is required for extensive cortical pathology to develop producing dementia.

Circunvalación del Hipocampo: Could some limitations of clinical diagnosis be attributed to the Consortium on Dementia with Lewy Bodies International Workshop criteria?

Professor McKeith: The fact that some (or all) of the core features of DLB proposed by the Consensus workshop may be absent in cases with extensive Alzheimer type pathology must limit clinical diagnostic accuracy. There are other difficulties with the original recommendations, particularly with respect to a definition of the item «fluctuation». These matters were reviewed at the Third International Workshop on DLB and PDD (Parkinson's Disease Dementia) held in Newcastle in September 2004.

The deliberations of the review group are continuing as new information emerges and it likely that an updated report will be published in 2005. Whatever limitations the Consensus criteria may have however, it is important not to lose sight of the fact that they have drawn attention to a relatively common cause of dementia which previously was not widely recognised and certainly seldom diagnosed.

The diagnosis of DLB is now made with confidence by clinicians in many parts of the world and I think that this must improve the management of their patients. The first caregiver associations for people with DLB and their carers are being established (http://www.lewybodydementia.org) and I look forward to us continuing to learn from one another about this disorder in all of its many forms.

Circunvalación del Hipocampo: Professor McKeith, thank you very much for your kindness in accepting this interview. We are sure that all of our readers will find it both clear and very helpful.